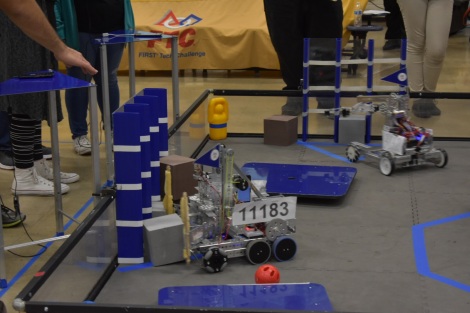 If you prefer to lead the robot uprising, rather than be overtaken by it, the McQueen Robotics club is your best opportunity.

And, you don’t have to be an evil genius to get involved.

“There are really no [prerequisites],” junior Larson Rivera said. “The only thing you need is a positive attitude and a mindset to solve things.”

That’s because the Robotics club builds robots that compete against other school’s robots in different challenges every year.

“You have four teams competing at the same time, and two teams are working together  against the other two teams,” said McQueen math teacher Mrs. Hair. “Whoever can win the most points during the three minute match wins.”

Sometimes these challenges can be very difficult.

“Whenever we hit a brick wall, or something fails and breaks catastrophically, fixing that is probably the most fun,” Larson said.

Even if you don’t know much about programming, Robotics can teach you everything you need to know. The club meets on Tuesdays and Thursdays in room 204 for about four hours a week. Rivera said anyone can join.

Larson said the Robotics club is beneficial because “it gives you skills for 21st century thinking” and offers several scholarships for juniors and seniors. Not only is it beneficial, but according to Mrs. Hair, the Robotics team has had success in the past.

“We were winning alliance for the Northern Regional the past two years,” she said.

If you are planning on joining, do it soon! Competition season is coming up towards the end of November!